The story of Purim, told in the biblical Book of Esther, has the ingredients of a good romance: amorous Persian king Ahasuerus plucks a beautiful virgin from his harem, unaware that she is Jewish.  Esther, the maiden, has a cousin, Mordecai, who discovers a plot against his people: the wicked prime minister, Haman, has drawn lots and picked the fourteenth day of Adar (the twelfth month in the Jewish calendar) for the destruction of the Jewish people.  (The word Purim means ‘lots’.)  Esther, now a queen, uses her high position to save her people and turn the tables on the villain, who is then hanged.

Esther’s triumph is celebrated at Purim, the joyous Jewish holiday that this year (2019) begins at sundown on March 20th and ends at nightfall on March 21st**.  Preceded by a minor fast, the holiday is marked by feasting, by exchanging gifts of food (Shalach Manot) with friends, and by giving to charity. [1]

One of the most popular symbolic Purim treats is hamantaschen, small triangular fruit or poppy seed-filled pastries.  Hamantaschen, Yiddish for ‘Haman’s pockets’ (alluding to the bribes Haman took), are also known in Hebrew under the generic name oznei Haman, literally ‘Haman’s ears’. [2] A common interpretation is that the shape of the hamantasch represents the tri-cornered hat supposedly worn by Haman.

These treats may derive from an eighteenth century German pastry called mohntaschen, which means ‘poppy-seed pockets’.  Over the years the name was changed to hamantaschen because of the association of the food with Purim.  In addition to poppy seeds, Jews in seventeenth century Bohemia and Czechoslovakia favoured a prune filling (lekvar), whilst in the late nineteenth and early twentieth century, the Jews of Ferrara in Northern Italy, had their own special recipe, involving a dough of sugar, mint liquor and marzipan. [3] Vividly carved wooden moulds from the nineteenth century, used for shaping the hamantaschen pastry, survive. [4] 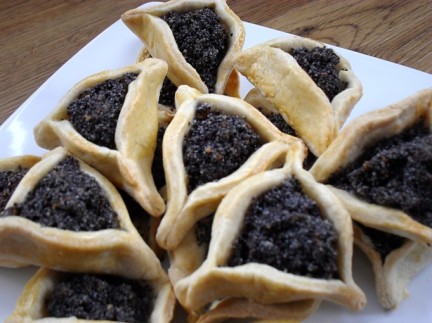 The following recipe is taken from Claudia Roden’s definitive work The Book of Jewish Food: An Odyssey from Samarkand and Vilna to the Present Day.  Happy Purim!

For the poppy-seed filling:

In a bowl, mix the flour with the salt, sugar and vanilla essence.  Cut the butter into pieces and rub into the flour.  Mix in the egg yolk and press the mixture into a soft ball.  Work very briefly, adding a little milk if necessary to bind it.  Wrap in cling film and cool in the fridge.

For the filling, put the poppy seeds in a pan with the milk and simmer for about 15 minutes or until thick.  Add the honey, sugar and raisins and cook 5 minutes more.  Add the lemon zest and juice and butter and mix well.  Let it cool.

Divide the dough into 4 for easier handling.  Roll out each piece on a floured surface with a floured rolling pin until it is 3 mm thick.  Cut into 7.5 cm rounds with a pastry cutter.  Take the scraps, roll out again, and cut into rounds.  (Alternatively, take a lump of dough a bit bigger than a walnut and flatten the dough by pressing it in the palm of your hand.)

Put a heaped teaspoon of filling in the centre of each round.  Lift up the edges on three sides and fold over the filling to form a triangular pyramid, pinching the sides together to seal them but leaving the top open.  Arrange on a greased tray and brush with beaten egg.  Bake in a preheated 375°F/190°C oven for 15-20 minutes, or until golden.  Do not try to remove the pastries from the tray while they are hot, or they will crumble.  Let them cool and lift them carefully off with a spatula, because they are fragile.

*Julia Biggs is a freelance art historian, with a particular expertise in devotional material culture, food, and sensation in the early modern Jewish home. Email: julia.biggs1@gmail.com

[1] Traditionally, the Purim holiday called for three ceremonial objects: the megillah (scroll), the noisemaker (shaken at every mention of the name of Haman), and the Purim plate.  Purim plates were used for collecting charity and serving sweet treats.  Many eighteenth century German examples of these plates are made of pewter and decorated with folk illustrations and quotations from the Book of Esther.

[2] According to the Jewish food historian Gil Marks, the phrase ‘Haman’s ears’ is actually “a misinterpretation arising from the medieval Italian custom of cutting off a criminal’s ear before execution”. Gil Marks, Encyclopedia of Jewish Food (2010), p. 248

[3] In addition to hamantaschen, other Purim culinary delights include folares, strips of pastry dough wrapped around a hard-boiled egg to resemble Haman incarcerated behind bars (popular with Sephardic Jews), and the Eastern European dish of kreplekh (dumplings filled with chopped meat).

[4] Examples of nineteenth century moulds from Ukraine can be seen here: https://thejewishmuseum.org/collection/21659-purim-pastry-mold